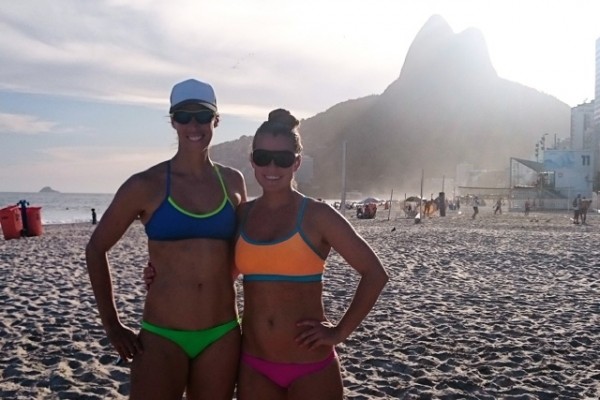 This week Brooke and I traveled down to the “Melhores do Mundo” USA versus BRA exhibition.  This event pitted the top 4 USA teams against the top 4 Brazilian teams. We are early in our preseason training, as our first tournament is still months away, but this was an excellent chance for Brooke and me to gauge our current playing level and see what adjustments we have to make moving forward. We were extremely happy to get this opportunity to compete against some of the best teams in the world on the same sand where the 2016 Olympic beach volleyball stadium will be located!

We opened with two very close matches—one that we won and one that we barely lost. We also had two very tough night matches where we did not pass well and couldn’t get much going. This was the first time we’d played together at night and appears to be something we’ll need to work on back home. It was encouraging, however, to see some positive moments arise in our play. We tried out some new strategies we’d been working on in practice and are hopeful we can continue to execute them on a consistent basis. And, of course, the Brazilians have an infectious passion for this sport and it was really fun to play in front of such an educated and spirited crowd.

After we were done playing, we traveled to Corcovado where the Cristo Redente statue stands overlooking Rio. It was cloudy, visibility was generally poor and we got rained on, but there were a few clear moments that made it all worthwhile. I found myself captivated by the power of the winds and the fast moving weather over the beautiful Rio landscape below and then I would turn and see a clear glimpse of Christ the Redeemer and I was just awestruck. It was almost more special with the rain and fog only offering occasional glances. It’s a nice parallel for life and sport: sometimes you have to suck it up during some rough patches to get brief views of what you want. It is this image that I will keep in mind everyday as Brooke and I work our tails off to get back here in 2016 and represent the USA in the Olympic Games.